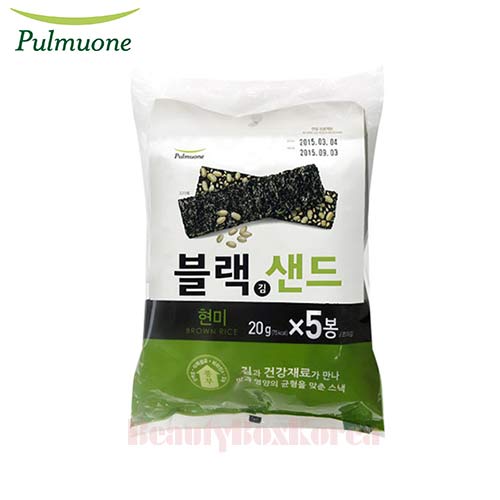 To add product, select an option in the above option box.

Great as a Healthy, Low-Calorie Snack

Pulmuone has recently released a premium nutritious snack: Crispy Seaweed Snack. It is made of seaweed―a traditional Korean ingredient that is becoming popular as a wellbeing food among foreign consumers. A layer of nutritious ingredients―brown rice, almonds, anchovy―is added between two sheets of seasoned seaweed and roasted until crispy. Thanks to the addition of the nutritious ingredients, the snack is rich in nutrition: dietary fiber, proteins, vitamin A, calcium, and so on.

Plans to Exports to the US and China

Pulmuone Crispy Seaweed Snack is a finger-sized snack. The seaweed snack is also not fried, so each package of the product (20g) has few calories (75kcal). The snack is good both as a wholesome snack for children and an accompaniment to beer for adults.  Pulmuone is getting ready to export the premium seaweed snack product to foreign countries such as the US. The company will hold sales promotions this year for Crispy Seaweed Snack in Korean marts and big local distributors overseas.
According to a member of the Pulmuone staff, “The Crispy Seaweed Snack is a new type of nutritious snack. The exports of our seaweed snack will contribute to promoting the taste and excellence of Korean seasoned seaweed to foreign consumers.”

There are no posts to show

There are no posts to show

This window will automatically close when payment is processed.
Do not close this window until processing completes.